What is Cushing's disease?

Cushing's disease is caused by the adrenal glands' increased production of cortisol (stress hormone). Increased cortisol production may be related to: 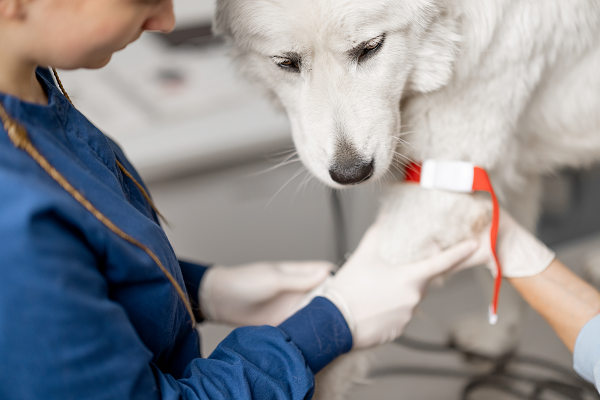 Complete blood count (CBC) (see handout "Complete Blood Count" for more information). The red and white blood cell counts and platelet components in a blood sample are evaluated. Often, an increase in the number of white blood cells (neutrophils and monocytes) is noted with Cushing's disease. This increase is usually related directly to the effects of excessive cortisol, but occasionally, an increase in these cells may indicate underlying inflammation or infection.

Serum biochemistry profile (see handout "Serum Biochemistry" for more information). Serum (the liquid portion of blood) contains enzymes, proteins, lipids (fats), glucose (sugar), and metabolites. These serum components are derived from different organs, such as the liver, kidneys, and pancreas, and can indicate these organs are functioning. Specific changes in the serum biochemistry profile may support the diagnosis of Cushing's disease and give us an indication of overall organ function. Typical findings with Cushing's disease may include increased blood glucose and liver-related enzymes. A specific liver enzyme, steroid alkaline phosphatase (S-ALP), increases directly in response to increased blood cortisol levels. Increases in blood lipid and cholesterol are also often noted.

Urinalysis (see handout "Urinalysis" for more information). Because dogs with Cushing's disease typically drink large amounts of water, the urine is dilute. A special instrument called a refractometer assesses urine concentration. Infection of the bladder (cystitis) is a common finding in Cushing's disease. The presence of infection can be assessed by looking at the cells voided into the urine and by sending a urine sample for bacterial culture (checking for the growth of bacteria). Some dogs with Cushing's disease also have concurrent diabetes. The presence of diabetes may be detected by glucose in the urine and by an increased concentration of glucose in the serum biochemistry profile.

"Some dogs with Cushing's disease also have concurrent diabetes."

Suppose a large number of changes characteristic of Cushing's disease are found with these initial screening tests. In that case, more extensive diagnostic tests will be required to confirm the diagnosis of Cushing's disease and to establish the type of Cushing's disease that your pet has. Knowing the type of disease is essential to formulate an effective treatment plan and to predict possible outcomes. These tests may include an adrenocorticotropic hormone (ACTH) stimulation test, low-dose dexamethasone suppression tests (LDDST), and/or endogenous ACTH concentrations.

How does the ACTH stimulation test work?

ACTH is a hormone naturally produced by the pituitary gland (a gland located in the brain). The purpose of ACTH is to tell the adrenal glands when and how much cortisol to produce. As the blood level of cortisol increases, it causes the pituitary gland to decrease its production of ACTH, which results in a lowering of the cortisol level. The ACTH stimulation test mimics this natural stimulatory pathway and demonstrates the capacity of the pet's adrenal glands to produce cortisol in response to an injection of synthetic ACTH. This test requires two blood samples. The first blood sample is taken, then an injection of synthetic ACTH is given, and the second blood sample is taken two hours following the injection. When the cortisol levels in the two samples are compared, they may show a normal response, an exaggerated response, or very little response.

"As your dog responds to treatment, the increases in cortisol will become less exaggerated in response to the injection of synthetic ACTH."

How does the low-dose dexamethasone suppression test work?

The LDDST requires three blood samples. The first sample is taken before dexamethasone injection, and the second and third samples are taken four and eight hours after injection.

How does the high-dose dexamethasone suppresion test work?

This test works on the same principle as the low dose test and is used when no reductions in cortisol levels are seen on the low dose test. The purpose is to determine which type of Cushing's disease is present. In rare instances with pituitary origin Cushing's disease, the negative feedback loop is more resistant to the effects of dexamethasone. A higher dosage of this synthetic cortisol may be required to overcome this resistance and demonstrate the negative feedback mechanism. If there is a reduction in cortisol levels at four or eight hours after the higher dose of dexamethasone, the diagnosis is pituitary origin Cushing's disease. If the levels do not budge from the high values of the pre-injection sample, the diagnosis is adrenal origin Cushing's disease.

"The purpose is to determine which type of Cushing's disease is present."

In most instances, a combination of these tests will either allow for a diagnosis of Cushing's disease or will rule out the disease in your pet. Additional testing, such as abdominal ultrasound, may be required to determine whether an adrenal tumor is present.

In rare instances, referral to a veterinary facility with MRI (magnetic resonance imaging) or CT (computed tomography) imaging may be needed to rule out or demonstrate the presence of pituitary or adrenal tumors.

Your veterinarian will determine which testing methods are best for your pet.