My cat seems to be afraid of people and/or other animals.

Why might that be? There are many reasons that cats can develop such fears. Your cat may have had limited exposure to people and other animals when it was young. Socialization is an important aspect of raising a kitten. Research studies have indicated that cats that are handled frequently and regularly during the first few weeks of life are generally more exploratory and more social. Without adequate, continuous and positive interactions with people, other animals, and new situations, cats may develop fears. Because the socialization period in cats begins and ends earlier (generally between 3 and 9 weeks) than it does in dogs, the early environment of the kitten is most important.

"The socialization period in cats begins and ends earlier (generally between 3 and 9 weeks) than it does in dogs."

Cats adopted as strays or from shelters may not have had adequate early exposure to many different and novel things. Cats can also develop fears through the effect of just one unpleasant experience (“one trial learning”) that was intense or traumatic. This learning may then generalize to similar situations. For example, a bad experience with a small child could result in a cat that is fearful of all small children. Sometimes a number of unpleasant events “paired” or associated with a person or animal can lead to increasing fear. For example, if a pet is punished or if some disturbing event occurs in the presence of a particular person or other animal, it may begin to pair the stimulus (the person or other animal) with the unpleasant consequence (punishment).

Genetics and the early environment are other important contributing factors to the development of fear. There are some cats that are inherently timid and fearful. These may never become outgoing and highly sociable. Still other cats experienced poor nutrition or poor maternal care during development or while kittens, and this affected their emotional development.

Can I prevent fears from developing in my cat?

Early, frequent, and pleasant encounters with people of all ages and types can help prevent later fears. Because genetics plays a role in the development of fears, select kittens that are nonfearful and sociable. Some evidence The socialization period in cats begins and ends earlier (generally between 3 and 9 weeks) than it does in dogs. has indicated the importance of the father’s role in personality; therefore, assessing and observing the kitten’s parents, in particular the father, may give some insight into the personality that a kitten may develop when it grows up.

What are the signs of fear?

When frightened, some cats may hide, try to appear smaller, pull their ears back and be immobile. Other cats may show signs of agitation or aggression, such as dilated pupils, arched back, pilo-erection (hair standing on end), and hissing.

What information do I need to identify and treat my fearful pet?

A behavioral consultation is needed for cats that are showing extreme fears and/or aggression. If the fears are mild, then owner intervention may help to prevent them from progressing. First it is necessary to identify all fearful stimuli. This is not always easy and needs to be very exact. Which person(s) or animal(s) is the cat afraid of, and where does the fearful behavior occur?

Often there are certain situations, people, and places that provoke the behavior more than others. For treatment to be most successful, it is important to be able to place the fearful stimuli along a gradient from low to high. Identify those situations, people, places and animals that are least likely, as well as most likely, to cause the fear.

Next, examine what factors may be reinforcing the behavior. Aggressive displays may be successful at getting the fearful stimulus to leave, and thus also reinforce the behavior. Any ongoing interactions that provoke fear need to be identified and removed. This could be teasing behavior, painful interactions, and punishment or overwhelming stimuli. Some owners reward the fearful behavior by reassuring their pets with vocal intonations or body contact, which leads the animal to assume that what they are doing at the time, is appropriate. 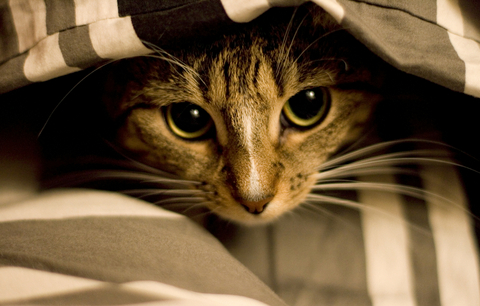 After I have identified the stimuli, what’s next?

Before a behavior modification program can begin, you must be able to control your cat. This can be accomplished with a figure eight harness and leash, or, if needed, a crate. Cats can also be trained to respond to basic commands for rewards (e.g., sit, come, give a paw). Once you are able to control your cat, teach your cat to pair a nonfearful situation with food rewards. The goal of this training is to allow the cat to assume a relaxed body posture and facial expression in the presence of the stimulus.

For most cats a program of counter-conditioning and desensitization will be required to acclimatize the cat to the stimuli that cause the fearful response.

Do this slowly. Start by exposing the cat to stimuli that are sufficiently mild that they do not evoke fear. Reward the cat for sitting quietly and calmly. Save all favored rewards for these retraining sessions so that the cat is highly motivated to get the reward.

"Cats can also be trained to respond
to basic commands for rewards."

The cat soon learns to expect rewards when placed in the cage and exposed to the stimulus. Gradually the stimulus intensity is increased. If the cat acts afraid during training, the stimuli are too intense and should be stopped. You must set up the cat to succeed.

Over time, the stimulus can be presented at a closer distance, or in a louder or more animated manner. The situation may then need to be changed to advance the training. For example, if your cat is fearful of a particular person, once that person can sit beside the cage while your cat eats, the person could then attempt to feed the cat favored treats through the bars of the cage. Next, the cat might eat and take rewards while out of the cage, wearing a leash and harness if necessary; it might be wise initially to increase the distance between the person and the cat, to ensure success and safety. Over time the person can move closer at feeding times, until he or she can give the cat its food. Cats that are fearful of other cats in the home might be fed in two different cages in the same room. Once the cats will eat with the cages next to each other during feeding times, you could begin by keeping one cat in the cage during feeding and allowing the other one out, and alternate at future feedings. Next, both cats could be fed while out of the cages at a distance, with one or both on halters; then progress to having the cats side-by-side at feedings. This can then advance to play sessions, catnip and treat times, and other times when the cats could “enjoy” themselves in each other’s company.

What should I do if my cat still encounters the fearful stimulus when we are not in a training exercise?

Each time the cat experiences the stimulus and reacts with a fear response, the problem is likely to be further aggravated. Also, any time the stimulus (e.g., other cat, person) threatens, retaliates or displays fear, the fearful behavior may become intensified. Each time the stimulus retreats or the cat escapes, the behavior has been reinforced. Therefore, until behavior modification has been completed, try and avoid the fear-producing stimulus, if possible. This may mean confining the cat when children visit or when the house is full of strangers.

"Until behavior modification has been completed, try to avoid the fear-producing stimulus if possible."

© Copyright 2012 LifeLearn Inc. Used and/or modified with permission under license.