Why are my cats suddenly fighting with each other?

There are many possible causes for aggressive behavior among household cats. Sometimes, a specific trigger or inciting event can cause one cat to suddenly behave aggressively toward another (see the handout “Cat Behavior Problems – Aggression Redirected”). More often, aggression develops gradually. Since early aggressive communications may be subtle, you may not notice or even recognize one cat threatening another. 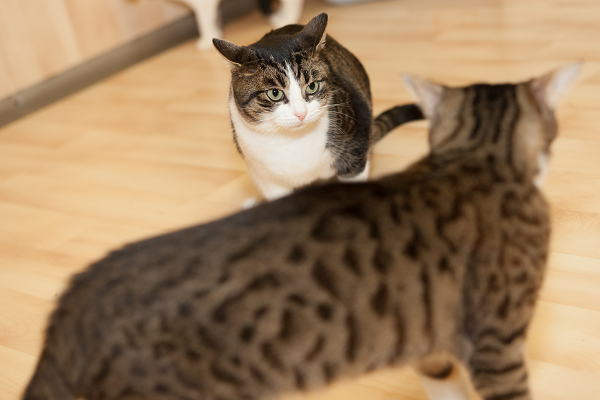 Besides redirected aggression, the leading causes of aggressive behavior between household cats are territorial aggression, fear-based aggression, and incompatible personalities. There may be more than one type of aggression occurring simultaneously. If you are concerned that your cats are exhibiting signs of fear or aggression when together, have your veterinarian examine them both, as underlying medical conditions can contribute to fear and aggression. If there is no underlying condition, consult a veterinary behaviorist to determine the cause(s) and create a treatment plan.

What is territorial aggression?

Territorial aggression is directed toward people or animals approaching the cat’s property. Cats who live indoors may treat specific indoor spaces as property and exhibit territorial aggression when other household cats approach them or when a new cat is introduced to the home. As in other species, territorial behavior is more likely to occur once cats mature socially, typically between two and three years of age.

"Territorial aggression is directed toward people or animals approaching the cat’s property."

Cats displaying territorial aggression exhibit behaviors intended to prevent other cats from gaining access to certain areas of the home. Blocking may be done subtly, for instance, with just a stare, or it may be more overt, with a growl or lunge. The cat may stalk or even chase other cats that attempt to approach their areas. Cats often use their position along a pathway to effectively block another cat’s access—they may sprawl across a doorway, for example. The posture of the territorially aggressive cat is usually upright, with ears forward.

Why does territorial aggression escalate? 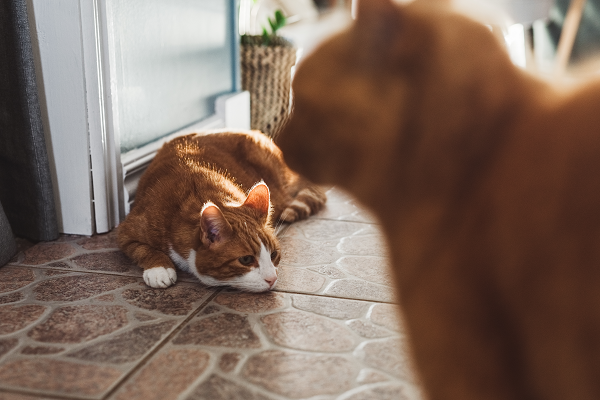 Each cat’s personality can affect the progression of territorial aggression. When the cat that is the recipient of the aggression is calm, social, and able to recognize a subtle threat, then by walking quietly away from a challenge, the aggressor’s territory can be maintained without any physical conflict. If the recipient cat instead runs away, perhaps due to fear, the aggressor can become excited and respond with a chase that can result in injury.

In other cases, the aggressor’s personality drives the escalation. For instance, some cats that exhibit territorial aggression do not use subtle postures but instead behave impulsively when approached and immediately lunge at or chase any cat that approaches, leaving no opportunity for a peaceful resolution.

How can territorial aggression be prevented?

The risk of territorial aggression between two resident cats may be reduced for cats living in an enriched environment with adequate resources spread throughout the living space. Multiple litter boxes should be placed so that each cat can gain easy access. Provide perches and cat beds in several desirable locations to reduce conflict overviews and resting spots. Multiple feeding stations should be provided as well. Be sure to provide plenty of toys in assorted areas and schedule regular play sessions. If the cats can share toys, create games that allow the cats to take turns batting at a shared toy. (See the handout “Cat Behavior and Training – Enrichment for Indoor Cats”.)

To prevent territorial aggression when a new cat joins the home, introduce the newcomer gradually. Feliway MultiCat® (Feliway Friends® in Canada) and Feliway Classic® pheromone diffusers can be placed in several locations as these products may reduce stress and facilitate harmony. (See the handout “Introducing New Adult Cats”.)

What is fear-based aggression?

"A frightened cat may either freeze, flee, or fight."

Initially, a fearful cat may avoid the other household cat. Her posture may be low, and her ears may be held back as she retreats. If the other cat is very social and continues to approach, the fearful cat may freeze and hiss or growl with her ears held back. However, if freezing does not afford relief, then over time, the fearful cat may put her ears forward and lunge. Even though the cat is fearful, the overtly aggressive response is motivated by fear and is described as fear-based aggression.

Why does fear-based aggression escalate?

Cats naturally chase things that move away. A cat that was initially friendly or neutral will be inclined to pursue a fearful cat that flees and can become aroused and aggressive in the process. This dynamic increases the recipient's fear while reinforcing the chaser's aggressive response.

How can fear-based aggression be prevented?

It is important to recognize subtle signs of fear. If you notice that one of your cats is starting to spend time alone or in unusual resting places, such as the top of the refrigerator or under a bed, it is time to look closer at the interactions between your cats. Notice whether one of your cats is overly eager to play or join the fearful cat; if so, provide plenty of activities to keep her busy. Providing an enriched environment with a wide range of toys and opportunities for social play is particularly important for social cats. Create multiple comfortable resting spots in the main living spaces, with easy access to all resources, so your fearful cat does not find herself alone under a bed or isolated on a high piece of furniture. Seek professional help early, as fear can increase over time.

"Providing an enriched environment with a wide range of toys and opportunities for social play is particularly important for social cats."

Is there a way to treat aggression between cats?

If your cats are exhibiting aggressive behavior toward each other, whether or not there are physical conflicts, they would benefit from an assessment from a professional such as a veterinary behaviorist. Once the motivation for the behavior is determined, a treatment program can be designed to improve the relationship between the cats. Behavior modification, and in some cases, medication, may be recommended to reduce both fear and aggression. A professional can also create an enrichment program to reduce stress. Be sure to have your veterinarian examine both cats.

If you are concerned for the safety of your cats, it is best to separate them except when you are available to carefully supervise and prevent them from staring, stalking, or otherwise being frightened until they can be assessed. The confinement space should be cozy, with a litter box, food and water, toys, and, if possible, a seat with a view of the outdoors. When the cats are together, keep a heavy blanket handy to toss over one that might be about to pounce. (See the handout “Treating Aggression Towards Other Household Cats”.)