What is radiation therapy?

Radiation therapy is the medical use of high-dose radiation to destroy cancer cells. Radiation is a type of energy produced naturally by the sun, earth, and rocks and artificially by machines. Radiation is used for diagnostic as well as therapeutic purposes. Low-dose radiation, for example, is used to take radiographs (X-rays).

Cancer cells grow and divide faster than most normal cells. Radiation therapy works by damaging the cells’ DNA to interfere with cell replication and kill them. In this way, radiation can either shrink a tumor or destroy it.

When is radiation therapy used? 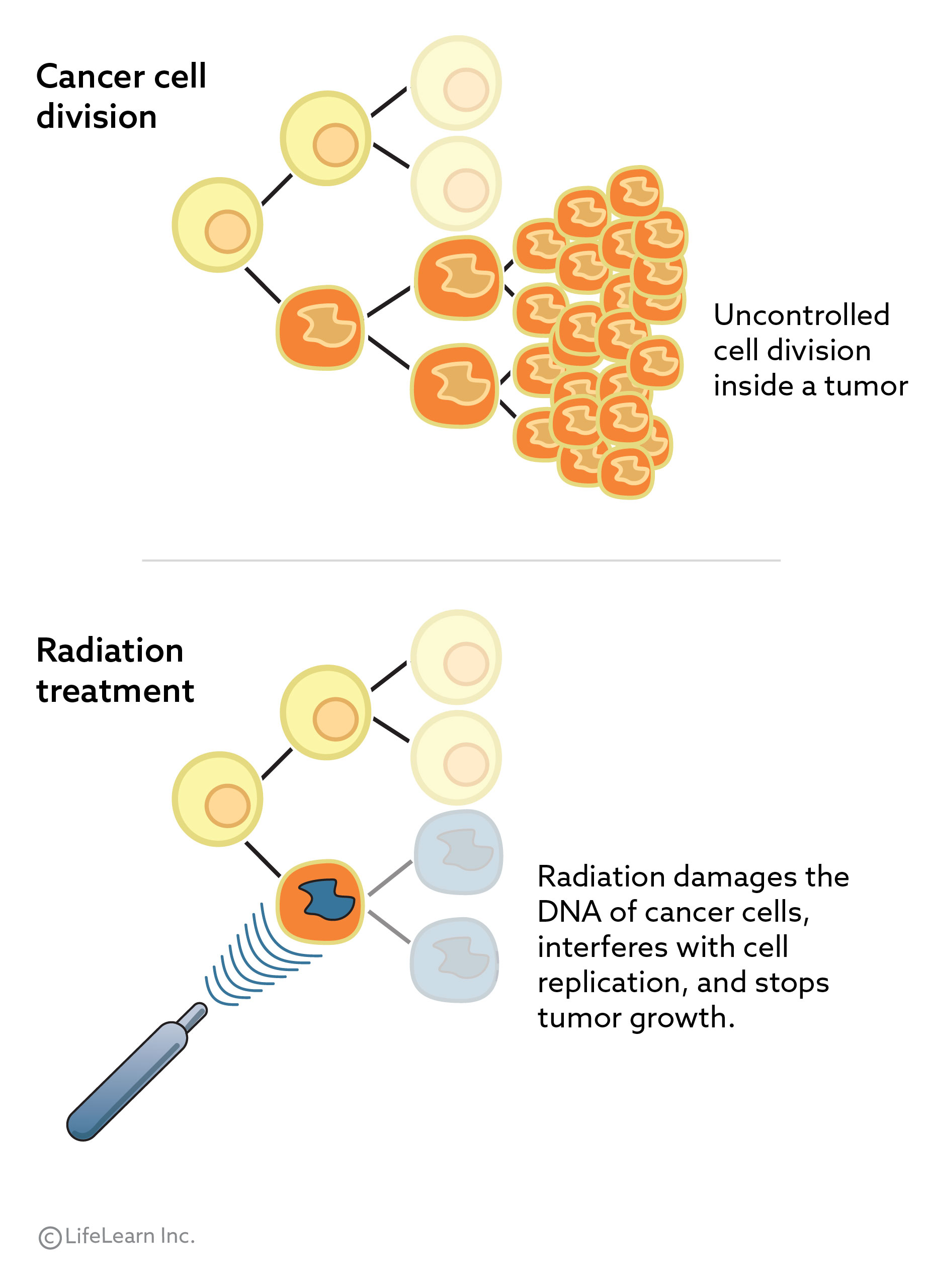 Depending on the type of tumor, radiation therapy may be used on its own or in combination with other treatments, such as surgery or chemotherapy. It is most effective with tumors that have rapidly dividing cells. Not all tumors are responsive to radiation.

Although several types of tumors can be treated with radiation therapy alone (e.g., nasal tumors, brain tumors, and certain types of lymphoma), radiation therapy is most commonly used to destroy or limit the growth of cancer cells left behind (i.e., microscopic disease) after a tumor has been surgically removed. Radiation therapy may also reduce the size of very large tumors before surgery, making the surgery more manageable.

How is radiation therapy administered?

Radiation therapy is typically administered while the pet is under a general anesthetic; the pet must be completely still during the procedure, as the radiation must be delivered with absolute precision. Depending on the treatment protocol, your pet may undergo several anesthetic procedures. The radiation delivery is usually quick, meaning your pet will only need to spend a brief time under anesthesia for each treatment.

Before commencing therapy, a CT scan is usually performed to ’mark’ the tumor's location. This allows the radiation to be delivered more precisely, minimizing damage to the surrounding tissues.

There are several types of radiation protocols in veterinary medicine:

What are the side effects of radiation therapy?

The side effects of radiation therapy can be split into two broad categories: early and late effects.

Early side effects are usually observed within two weeks after starting radiation therapy and can continue up until one month after the treatment has begun. These effects are usually inflammatory, with areas such as the skin and mucous membranes most commonly affected. Redness, irritation, and ulceration of the treated surface can develop (moist desquamation). Your veterinary oncologist will discuss the side effects that your pet may experience. Some possible effects are described below:

Late side effects usually occur more than six months after therapy. These effects also depend on the tumor and its surrounding tissues. Your veterinary oncologist will discuss the possible effects and what to watch for.