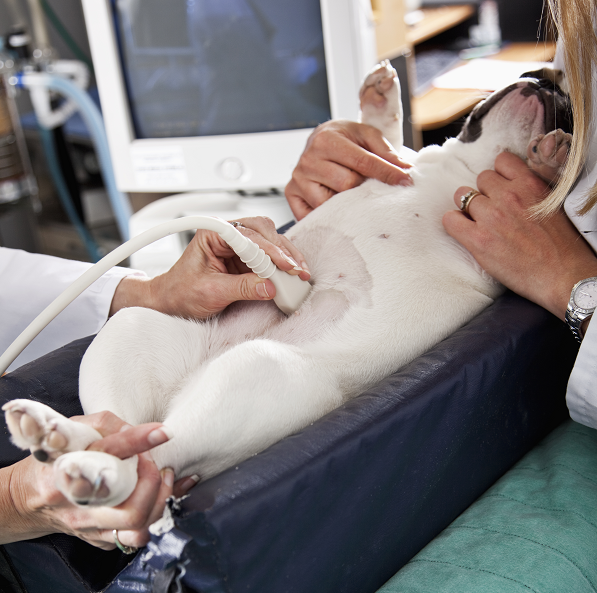 Infertility in a female dog is defined as the inability to conceive and deliver viable puppies, even when mated multiple times with a known fertile male surrounding the time of ovulation.

What are the causes of infertility in female dogs?

Fertility problems in female dogs can be broken down into broad categories: abnormal estrous cycling, failure to copulate (breed), failure to conceive, and pregnancy loss.

What is abnormal estrous cycling?

Abnormal estrous cycling is a term used to describe a female dog that is not experiencing normal heat cycles. These abnormalities may include delayed, absent, or irregular cycles. A normal female dog should begin having estrous (heat) cycles by two years of age.

There are several stages in the estrous cycle; the stage called estrus refers to when the female is in heat or is sexually receptive. Once these cycles begin, the dog should experience estrus at regular intervals. Most female dogs cycle every four to ten months, although some dogs may only cycle once per year.

"Most female dogs cycle every four to ten months..."

Primary persistent anestrus describes a female dog that has reached two years of age without estrous cycling. This condition may be caused by several factors including malnutrition, excessive physical activity, medications that interfere with fertility, or a lack of exposure to other cycling females.

If a dog has experienced one cycle but does not cycle again, secondary persistent anestrus may be diagnosed. This term describes a delay of over 18 months since the last estrus. In some dogs, this is an age-related condition; dogs under two years of age may experience irregular cycles and the same is typically seen in older dogs.

A variety of infections (e.g., E. coli, brucellosis, ureaplasmosis) and metabolic diseases (e.g., renal failure, hypothyroidism, Cushing’s disease) may cause systemic diseases that can lead to a failure to cycle. Exposure to oral and topical steroids (such as those used by humans), hormonal imbalances, and ovarian tumors may also lead to persistent anestrus.

Irregular estrus cycling indicates that the ovaries are not functioning properly. In this case, abnormal hormone levels are often responsible for a failure to trigger regular estrous cycles.

Additionally, hormonal imbalances and genetic disorders may prevent normal estrous cycles. Some dogs experience a condition called silent heat, in which they do ovulate but the characteristic signs of being in heat, such as vulvar swelling and discharge, are not observed. Although rare, some dogs may also have an autoimmune disease that affects their ovaries and interferes with estrous cycling.

What causes failure to copulate?

If the time of fertility is inaccurately estimated, this may lead to the female being unwilling to copulate. Many cases of female infertility are likely related to poorly timed breeding.

Behavioral factors may contribute to a refusal to copulate. These factors include a dominant female dog refusing to stand for a submissive male, attempts to breed a female that is sexually immature, a stressful or otherwise unpleasant breeding environment, and inappropriate behaviors by either the male or female.

"Physical factors may contribute to a failure to copulate if they are a source of pain for the female."

Physical factors may contribute to a failure to copulate if they are a source of pain for the female. Common physical factors include hereditary abnormalities of the vagina, a history of vaginal trauma, or vaginal growths. Additionally, conditions such as osteoarthritis or back pain may make females resistant to standing for a male.

Why would a dog fail to conceive?

If the breeding is properly timed, the male is known to be fertile, and the semen is handled correctly (in the case of artificial insemination), physical abnormalities of the female may be suspected.

If a dog successfully conceives, what can cause pregnancy loss?

Pregnancy loss may be attributed to several factors. Imbalances in reproductive hormones may result in insufficient hormone levels to sustain a pregnancy. Other hormonal imbalances (e.g., diabetes and hypothyroidism) may affect reproductive hormone levels and result in pregnancy loss. The administration of certain drugs (e.g., corticosteroids) may lead to fetal death, as can some infections (e.g., Brucellosis).

"Imbalances in reproductive hormones may result in insufficient hormone levels to sustain a pregnancy."

What tests will my veterinarian run to assess my female dog’s infertility?

4. Imaging. X-rays or ultrasounds may reveal abnormalities in the abdomen.

5. Vaginal cytology and culture. This test involves taking a swab from the vagina for microscopic examination and bacterial culture.

How is infertility treated in the female dog?

The treatment of infertility depends upon the results obtained from the diagnostic testing and resulting diagnosis. Ovarian cysts or tumors may require surgical excision, hormonal imbalances may need to be corrected, and infections will require treatment.

Medications can be used to induce estrus in dogs that are not cycling. The success of this technique is variable, but it can lead to successful breeding.

Optimizing the timing of breeding is often helpful. The most effective approach is to measure hormone levels to determine the day of ovulation. In cases where natural breeding can be performed, the dogs should be allowed to mate every other day for as long as the female will allow it. With artificial insemination, the optimal timing for insemination should be based on the type of semen used and the method of insemination.

Regardless of fertility status, all breeding females should be provided with a sanitary, low-stress environment and optimal nutrition. Raw diets should be avoided in breeding dogs, due to the risk of infections that may contribute to infertility.