Which spiders are associated with problematic spider bites? 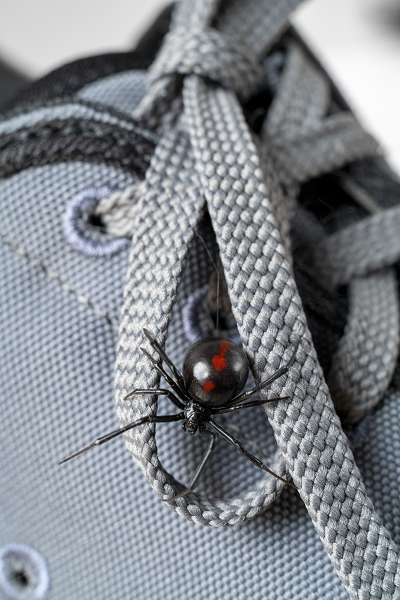 There are over 48,000 species of spiders worldwide, most of which are venomous. However, most spiders cannot produce a medically significant envenomation (the process by which venom is injected into an animal) because their small mouthparts cannot penetrate the skin. The two groups of spiders responsible for most medically significant spider bites include the widow spiders (Latrodectus spp., including the black widow spider) and the recluse spiders (Loxosceles spp., including the brown recluse).

Widow spiders are found in tropical and temperate areas worldwide. Five Latrodectus species are found in the United States; the most common is the black widow spider (Latrodectus mactans). Female black widows are significantly larger and more venomous than males. They are dark grey to black, with a red or orange hourglass marking on their round abdomen. Immature female black widows lack this coloration, being red, brown, or beige, but they can also produce envenomation.

What are the clinical signs of a spider bite?

The clinical signs of a spider bite vary with which species delivered the bite.

Patients bitten by a black widow spider may develop clinical signs within eight hours. Approximately 15% of black widow bites are 'dry bites', in which envenomation does not occur, and 85% involve some degree of envenomation. Although most bites result in envenomation, few patients develop significant clinical signs. Initially, a black widow bite is moderately painful and accompanied by mild redness or swelling. In the following hours, more severe signs may occur. These signs include muscle pain and cramping, vomiting, diarrhea, tremors, and agitation. Affected dogs and cats may also develop muscle rigidity, have rapid heart and respiratory rates, and may seem painful in their abdomen. 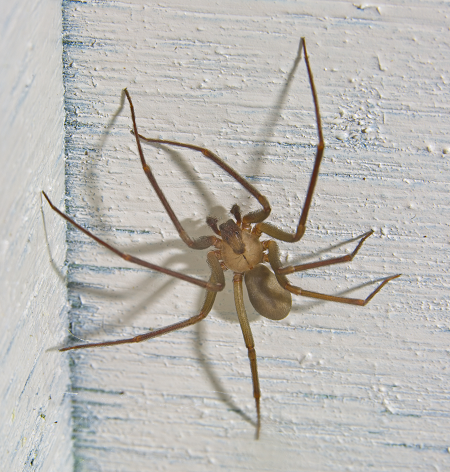 Brown recluse bites, in contrast, are often not painful at the time of the bite. A small amount of stinging or redness may be noted, and a blister may develop at the site within two to eight hours. This blister often develops into a 'bulls-eye' lesion, with a red circle surrounding a pale area that will progress to a dark area of tissue necrosis (death). Fever and lethargy may develop in the days following the bite. In rare cases, kidney and clotting abnormalities may occur; however, brown recluse bites primarily cause a local reaction and localized tissue damage.

How does spider venom produce these effects?

The effects of black widow and brown recluse spider bites vary significantly due to differences in the venom of these two types of spiders.

Black widow spider venom contains a neurotoxin. This substance causes massive excitation of neurons (the cells within the nervous system), leading to muscle tremors and other effects seen in black widow envenomation.

Brown recluse spider venom, in contrast, contains several substances that trigger local tissue effects. The first part of brown recluse venom contains a substance known as sphingomyelinase D, which interferes with blood clotting at the site of the bite. Additional toxins are injected into the bite victim, contributing to local inflammation and tissue necrosis.

How is a spider bite diagnosed?

Spider bites are primarily diagnosed based on clinical signs. Black widow spider bites may produce blood work abnormalities that can guide a diagnosis, although this is not always the case. The only way to definitively diagnose a spider bite is to collect and identify the spider responsible for causing the bite. However, this is rarely performed.

"The only way to definitively diagnose a spider bite is to collect and identify the spider..."

How is a spider bite treated?

There is an antivenin available for black widow spider bites. This medication is given intravenously (IV), and signs of envenomation typically resolve within 30 minutes. Allergic reactions to the antivenin may occur; however, your veterinarian will likely give medication to decrease the likelihood of an allergic reaction. In the absence of antivenin, pain medications and muscle relaxers are used to control clinical signs, and IV fluids are used for supportive care. Complete recovery may take up to several weeks, especially if antivenin is unavailable.

Brown recluse spider bites are treated with supportive care, as there is no available antivenin in the United States. Wounds are treated with regular wound cleaning, cool compresses, and immobilization using bandages. Antibiotics may also be needed for infected bites. Most bites heal within one to eight weeks, and systemic complications or death are rare. In very severe cases, wounds may require surgical treatment or leave permanent scarring, but this is uncommon.