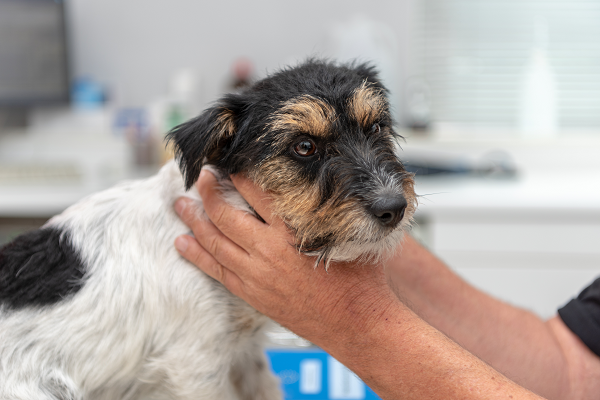 What is atlantoaxial luxation?

Atlantoaxial (AA) luxation is a condition in which instability or excessive movement is present between the first two vertebrae within the neck. This spinal disorder is most commonly seen in young, small breed dogs, such as Toy Poodles, Miniature Poodles, Yorkshire Terriers, Pomeranians, and Chihuahuas. Less commonly, however, large breed dogs and even cats can be affected.

The first two bones in the neck are called the atlas and the axis. The atlas is the first neck bone located closest to the skull. The axis, the second bone in the neck, sits immediately behind the atlas. The bones are held together by a series of ligaments and by the structure of the bone itself. The axis has a process, called the dens, that extends forward and fits against the atlas, helping to stabilize the connection between these two bones.

Atlantoaxial luxation can be caused by trauma, hereditary factors, or a combination of these two factors.

In the case of trauma, forceful flexion of the neck can cause damage to the atlantoaxial joint. Ligaments that stabilize the joint may be torn or the dens may be broken off the axis. These injuries can occur in any breed of dog at any age if the right forces are applied.

In some small breed dogs, however, hereditary factors may contribute to an abnormal atlantoaxial joint. In many cases, the dens is abnormally shaped, interfering with how the atlas and axis fit together. This can contribute to a situation in which even minimal trauma can cause a failure of the ligaments, leading to instability between the atlas and axis. This instability compresses the spinal cord, leading to neurologic signs.

What are the clinical signs of atlantoaxial luxation?

The signs of AA luxation are related to the pressure that is placed on the spinal cord as these two bones move against each other in an unstable manner. Signs may develop acutely, such as in cases of trauma, but the progression is often gradual, with episodes of intermittent clinical signs. In dogs with a genetic predisposition, signs are often noted during the first year of life and may become worse after seemingly mild trauma (e.g., a fall or rough play).

"The most common sign of AA luxation is neck pain..."

The most common sign of AA luxation is neck pain; in some dogs, this may be the only sign. Spinal cord compression may also lead to abnormalities in sensation and mobility from the neck down. Many affected dogs will demonstrate weakness or wobbliness of all four legs, an inability to stand, and/or an inability to move the legs. Some dogs may hold their heads in an unusual manner, such as looking down or holding their head tilted to the side. Severely affected dogs may lose their ability to breathe due to paralysis of the diaphragm. In these severe cases, AA luxation can be fatal.

How is atlantoaxial luxation diagnosed?

In many cases, AA luxation can be diagnosed with routine radiographs (X-rays). A radiograph of the neck, taken while the neck is held in a neutral position, may show an abnormally large gap between the atlas and axis or an abnormally sharp angle at this joint. If radiographs are not diagnostic, advanced imaging, such as CT or MRI, may be required to obtain a diagnosis.

How is atlantoaxial luxation treated?

If signs are mild, conservative therapy may be attempted. Your dog will be placed in a rigid neck splint and confined to a kennel for six to eight weeks. Immobilization of the neck will, in theory, allow scar tissue to form that will help stabilize the joint. During this time, your dog will also be treated with pain medication to keep him comfortable and/or steroids to decrease spinal swelling. While some dogs will experience complete resolution of clinical signs with conservative treatment, many dogs will not, especially if their signs have been present for an extended period of time. The risks of conservative therapy can include the progression of disease (including the risk of paralysis or death) as well as pressure sores from the splint/bandage rubbing against the skin.

"If signs are mild, conservative therapy may be attempted."

In the case of long-standing neurologic signs, or a dog that has not responded to conservative treatment, surgery is often required. The goal of surgery is to permanently stabilize the atlantoaxial joint in order to prohibit excessive motion and relieve pressure on the spinal cord. A surgeon will use screws and bone cement to permanently attach the atlas and the axis to each other, preventing movement at this joint.

After surgery, your dog will need six to eight weeks of cage rest prior to returning to activity. This period of rest gives time for the attachment between the two bones to heal. Additionally, your dog may need to wear a neck splint as part of his recovery. Neck radiographs will be performed at multiple points during recovery to ensure that healing is progressing as expected. The prognosis after surgery varies depending on your dog’s age, the severity of clinical signs, and the degree of spinal damage present.