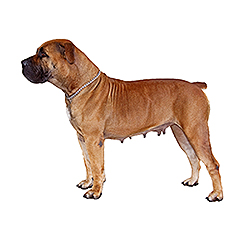 The Boerboel came into being in South Africa in the 1650s when Jan van Riebeeck’s family dog bred with the indigenous domestic dogs of the area. Their name means “farm dog” and they’re probably the most agile of the Mastiff-type dogs. They haven’t changed much in the last few centuries – they are clearly recognizable in paintings from the mid-1800s. The breed received recognition from the American Kennel Club in 2015.

These dogs were bred to defend the family from large predators in Africa. That means that Boerboels are strong and fearless with guardian instincts. They’re also very playful and affectionate toward their owners. They are gentle with the family children and tend to do fine with other pets, including cats and other dogs, as long as they are properly introduced. They are loyal, obedient, and intelligent. You have to watch that guardian instinct, though, and be careful about the situations you put them in – they can be aggressive when provoked or threatened. If you’re not home, they won’t let anyone in the house unless they know them really well – so keep that in mind if you plan to have someone drop by to let them out while you’re away.

Boerboels are large, muscular dogs with powerful but agile movement. They have distinctive heads that are broad and blocky, with a little bit of a brow wrinkle when they’re interested in what’s going on. They have medium, V-shaped ears that hang forward and an intelligent face. They have a short, dense, shiny coat in brown, red, fawn, or brindle, sometimes with a black mask.

While they are loyal and intelligent, they can be dominant and stubborn, so beginning training while they are puppies is your best bet. Clear, consistent direction and boundaries from an early age will help ensure you have an obedient and stable pet. These dogs love to play fetch, and are great at activities like competitive obedience, rally, weight pulling, herding, agility, and even therapy work.

Their short, shiny coats benefit from weekly brushing, but they don’t need frequent bathing. Take care of ears, nails, and teeth, and you’re all set. Socialize these guys from puppyhood so that you can handle their feet and mouths without difficulty when they are strong, powerful adults.

While they are considered a relatively healthy breed, like all purebred dogs, Boerboels can be prone to certain conditions. Allergies and joint problems can be an issue, and like all large, deep-chested dogs, they can be prone to stomach bloat and torsion. Don’t hesitate to ask your breeder about the health histories of their dogs and puppies.

So rare that they don’t appear in pop culture yet, you can catch plenty of Boerboel antics on YouTube!

© Copyright 2015 LifeLearn Inc. Used and/or modified with permission under license.