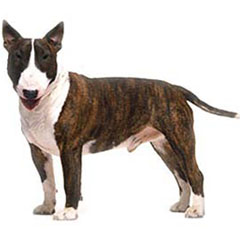 The Bull Terrier's beginnings are in nineteenth-century England, where blood-sport enthusiasts decided to develop an ideal fighting dog by crossing Bulldogs with Terriers. Some of these dogs eventually evolved into the American Staffordshire Terrier and the Staffordshire Bull Terrier. However, a breeder named James Hinks began to create a third breed by adding the now-extinct White English Terrier to the mix. His objective was to elongate the head, straighten the bow legs, and build a more symmetrical body. Later, other breeders added breeds such as the Dalmatian, and possibly Greyhounds and Whippets, to further develop the elongated, no-stop (i.e. no-brow) head that makes today's Bull Terrier instantly identifiable. Eventually, Bull Terriers crossed the Atlantic and began to appear in the United States. The American Kennel Club recognized the breed in 1895. In 1992, the AKC recognized two different sizes: the Bull Terrier and the Miniature Bull Terrier. In 2006, the Bull Terrier ranked 61st among 154 breeds registered to the American Kennel Club.

The Bull Terrier is notable for his devotion to his people. He insists on being a part of the action; this dog will not thrive if relegated to the back yard or even another room of the house. He's highly energetic and does best in households where the humans are equally active. Regular exercise and plenty of chew toys are necessary to keep him from exercising his powerful jaws on the household furniture. This breed can be wonderful with considerate, school-aged children if socialized from puppyhood. The Bull Terrier also is generally friendly with people who come to the home, and makes an excellent canine host.

The Bull Terrier is a medium-sized dog who stands at least 14 inches high at the shoulder and weighs 30 to 65 pounds. His short coat may be white or colored. His ears stand erect, and he has powerful, muscular body. The dog has a unique, elongated profile in which the stop (the intersection of the upper and lower parts of the face) is not defined at all. The dog's triangle-shaped eyes are unique in the canine kingdom.

Bull Terriers are intelligent, energetic individuals with minds of their own. They respond best to training built on positive reinforcement. Trainers should be consistent, patient, and endowed with a sense of humor in response to the Bull Terrier's clownishness. Daily strenuous exercise will help make the dog more receptive to training and can avert destructiveness. Those who want to take training to the next level should consider working with their Bull Terriers in agility, flyball, and weight pulling.

The Bull Terrier is a very easy keeper. A weekly brushing, pedicure, and ear cleaning (plus periodic baths) are all he needs to look and feel his best.

Like all purebred dogs, the Bull Terrier has some genetic health issues. Among the most common are patellar luxation (dislocated kneecap); lens luxation (eye ailment that precedes glaucoma ); deafness and renal cortical hypoplasia (degenerating kidney). Before being bred, dogs intended for breeding should receive OFA and BAER clearances for knees and deafness respectively, and also a urinalysis to uncover possible kidney problems. Prospective buyers should ask to see the results of all these evaluations before purchasing a puppy or dog. The breed also is susceptible to skin allergies.