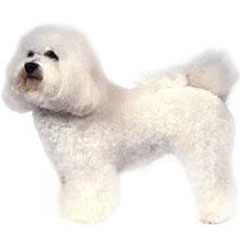 Like so many dogs from the distant past, the exact origins of the Bichon Frise as well as its genealogy are faded into unrecorded history. Current breed history is based on assumptions, interpretations and extrapolation, derived from bits and pieces of fact and fable. For example, it has been written that there was some small, white dog running around the shores of eastern Mediterranean countries before the time of Jesus Christ and that it was supposedly an ancestor of the Maltese or some Spitz-type dog from which came the Bichon. Then there are those authorities who believe that the Bichon, like the Caniche, came from the Barber or Water-Spaniel, theBarbichon. They write that the name Bichon is a contraction of Barbichon. Through the historical fog comes the theory that these dogs mated with other similar types on the Canary Island of Teneriffe as the result of having been introduced there by Spanish sailors. The legend continues to credit sailors from 1300 onward as responsible for the Bichon's introduction to the European continent where it became popular, lost its popularity, and then gained it back.

Bichons are high-energy dogs that become easily excited – especially when visitors come to call – although they do have periods of calmness. They are very playful and active both indoors and out. It's in their nature to please and because of this they are highly trainable. Poorly-bred Bichons may be shy or snappish. They are charming enough to coax most people into playing with them. They are happy, cheerful dogs, affectionate and quite intelligent. Bichons are also very curious dogs capable of getting into mischief when left alone.

The Bichon Frise is a small, sturdy dog with a long, full-coated tail that curls upward and is directed toward his back. Soft, dark eyes, nose, and lips emerge almost like coal, contrasting against a light-colored coat that covers the entire body and head with long, fluffy fur. He always has an inquisitive, alert, mostly playful facial expression. His undercoat is soft and dense and his outer coat is somewhat coarser and curly. The coat color is snow white with possible shadings of buff, cream or apricot.

Housebreaking may be troublesome and therefore should be initiated as early as possible. Bichons are high-energy dogs, easily distracted, and therefore must be trained in a quiet, undisturbed area. Anything that moves or makes noise – such as other animals, people, cars, or children playing – will siphon off their attention from obedience lessons. Once they understand what you've taught them, take them to a busy area and reinforce the training by giving the commands amid distractions.

The Bichon coat must be brushed and combed out at least every other day, but every day is best in order to avoid tangles and matting, which can be painful to undo. When bathed and brushed, the fur stands off the body maintaining its powderpuff look — the most identifying factor of this breed's appearance. More than most breeds, his coat requires trimming approximately every six weeks and must be scissored to follow the natural outline of the body. The trimming of the Bichon coat requires skill and experience and is best left to a professional groomer.

"Oliver the World Famous Bichon Frise," a book aimed at children with chronic illnesses, based on a real dog.